Many communities following in the footsteps of Bitcoin Beach are seeking to launch their own Lightning wallet on top of the GaloyMoney open source core banking platform. The problem is; it’s complex and costly to run for bootstrapped community initiatives. This month, Openoms (Raspiblitz contributor) and Fernando of Praia Bitcoin (Bitcoin Beach Brazil) set out to deploy a Galoy instance on a computer.

The #FOSS @GaloyMoney infrastructure does help to further decentralization by making it possible to deploy banks anywhere by anyone.
Proud to help Fernando at @BitcoinBeachBR, he deserves our support for his hard work as a community lead in Brazil 🇧🇷 https://t.co/Awz1n2Ux1a

Join us in supporting this important project: https://donate.praiabitcoin.org

The Open Source Stage at the Bitcoin Conference earlier this month convened great minds to discuss and debate the current state and future of Bitcoin and Lightning. 15 hours of panels covered topics from core development to Bitcoin’s attack vectors to improving the developer experience. We cover key highlights and share video cuts on the Galoy blog.

Check out some key takeaways and great rips on the Galoy blog:https://t.co/lA5szAqU43

If it wasn’t clear from Bitcoin 2022 announcements, the world is waking up to the potential of the Lightning Network. This week, Morgan Stanley explored the prospects of using Lightning for Retail Payments. Alex Gladstein recapped the report in a Twitter thread: “in essence, Strike is directly competing with Visa Direct, which offers real time settlement. The main difference for merchants will be charged a much lower transaction fee…” Open, permissionless global money, coming to a store near you. View Gladstein’s thread:

The growing interest around tokens on top of Bitcoin and the Lightning Network was recently reinforced with the announcement of Taro by Lightning Labs. The idea of creating tokens representing assets that can be transferred and stored with the same security and convenience that Bitcoin offers goes back to colored coins in 2013. Later in 2017, Peter Todd described a solution to move the token transfer validation work out of the consensus layer and keep it off-chain. Over the years a couple of projects emerged trying to modernize tokens-on-Bitcoin protocols and make them compatible with the Lightning Network, in particular RGB, OmniBolt and, most recently, Taro. Check out Frederico Tenga’s comprehensive write-up about assets on Bitcoin to learn more!

Dollar-pegged tokens, also called stablecoins, like Tether, USDC or DAI have attracted a lot of users in the last years, especially in emerging markets where users seek refuge in digitized dollars to protect themselves from inflation of their crumbling national currencies. But even in bitcoinizing countries like El Salvador, the transition from USD to SATS as the unit of account doesn’t happen overnight and there is a demand for holding value in dollars. Merchants have prices denominated in USD, and so are almost all financial obligations. The team at Galoy is excited to announce that in a near release Bitcoin Beach Wallet will give users the ability to hold their money in a synthetic USD wallet while preserving the ability to transact natively over Lightning. This is made possible with the use of derivatives and avoids the introduction of a new token entirely. To learn how it will work, check out Nicolas Burtey’s presentation on USD over Lightning at the bolt.fun hackathon.

Arcane Research published the second volume of their “State of Lightning” report with exciting growth numbers for Lightning usage and reach, estimating that the number of users with access to Lightning payments has exploded from around 100K in summer 2021 to 80M in March 2022. The reach explosion is mostly attributed to the new Lightning integrations in CashApp and Paxful. Usage of the Lightning Network is growing fast, too, with the number of payments having roughly doubled year over year, while the value of the payments has increased by more than 400%, measured in US dollars. The report also highlights the high potential for positive changes Bitcoin and Lightning can bring especially to the developing world. “If Bitcoin and the Lightning Network can accelerate financial inclusion, it’s hard not to be excited by the potential for long-term impact.”, the report concludes.

RoboSats, a simple and private way to exchange bitcoin for national currencies has recently been launched by a group of anonymous devs. It simplifies the peer-to-peer user experience and uses lightning hold invoices to minimize custody and trust requirements. If you’re looking to exchange sats for fiat privately, check out BTCSession’s video tutorial or hop into the excellent walkthroughs to get started!

Bitcoin projects continue to pop up like mushrooms around the world. One newer community is Bitcoin Natal, a Brazilian project following in the footsteps of Praia Bitcoin in Jericoacoara.

There’s a new community project in Africa to keep in your sights. Bitcoin Teranga in Sénégal is getting off the ground and will benefit from having a Lightning wallet built on top of the GaloyMoney platform: Fode Diop is building Nafa Wallet and it’s looking *good*.

In case you missed it, Fode is also announced the Africa Bitcoin Conference, to take place in Ghana in December 2022.

A community in Peru has turned to Bitcoin to empower marginalized communities. An NGO called Motiv launched a series of programs ranging from medical care to entrepreneurship classes and is leveraging Bitcoin to bring inclusion and hope to disadvantaged communities through 15 hubs in Peru. Motiv co-founder Rich Swisher says “Being able to have unobstructed access to a financial system that is not seizable and not able to be shut off by changing governments is key for people to build hope.”

"We're gonna wake this little economy back up, but we're gonna wake it up with Bitcoin." - @MotivPM sharing the amazing story of bringing Bitcoin to help people in Peru 👇 https://t.co/ceB1LqL7WV

If you’re following Bitcoin Jungle on Twitter, your feed is probably filled with photos of new merchants accepting Bitcoin payments in Costa Rica. The region around Utiva is adding new restaurants and cafés on the regular, illustrated not only by the increasing number of orange pins in the Bitcoin Jungle App, but also by travel reports of Bull Bitcoin founder Francis Pouilot, who shared his delight about paying for his coffees with Bitcoin.

Costa Rica is getting orange pilled by the day with @BitcoinJungleCR pic.twitter.com/yJM7gS9XEZ

MiPrimerBitcoin, a Bitcoin education non-profit based in El Salvador is starting the country’s first official Bitcoin Diploma program in the public school system and is looking for donations. Two hundred students, mostly 16- and 17-years old, will be trained in the basics of Bitcoin and financial literacy in a 10-week course. The pilot program is built with the intention that it can easily be copied and rolled out nationwide next year. The project’s vision is to create precedents and materials that will make this easy to copy elsewhere as well.

Robinhood integrating Lightning was one of the more unexpected announcements at Bitcoin 2022. CEO Vlad Tenev shared that “We’re excited to bring even lower costs to our customers by integrating with the Lightning network.” The announcement was quickly overshadowed, however, by Tenev’s dogecoin rant last week 😳:

Can #Doge truly be the future currency of the Internet and the people? As we added the ability to send/receive DOGE on Robinhood, I’ve been thinking about what that would take.

Within three weeks of launching Lightning, Kraken 🐙 processed more than 2,500 bitcoin deposits and withdrawals over Lightning and the Kraken node became the 6th biggest on the network.

Since launching Lightning ⚡️ at Kraken just three weeks ago:

Invited to the Bitcoin 2022 stage by Samson Mow who had been teasing with “3 mic drops”, Mexican senator Indira Kempis came on to announce a bill that would make Bitcoin legal tender in Mexico saying “We need Bitcoin to be legal tender in Mexico”. The first draft submitted by her office on April 6th outlines the importance of digital payments for financial inclusion. The proposed changes to the existing legal tender laws, however, contain only a single addition to legal tender regulations: “la moneda digital del Banco Central” – a CBDC. When the news of the actual bill broke to Twitter, it caused a lot of disappointment and backlash against the senator. Twitter user Mononautical laid out an interesting thesis that proposing a CBDC in the first step might actually be a smart move to avoid rejection in the first instance and get the process rolling. His take was confirmed later in an interview of Kempis, as well as by Samson Mow, who noted “every nation-state will require different strategies. El Salvador has spoiled Bitcoiners and made them think this is going to be easy.” 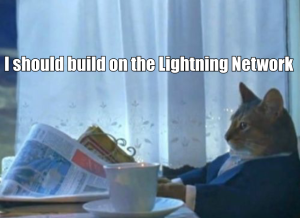 Ready to build on Lightning? Join our growing, global team of Bitcoiners who are working to make it easy for communities, companies and governments around the world to use Bitcoin as money. View openings on Bitcoinerjobs.

A delegation of Bitcoiners followed an invitation of President Faustin Touadéra to visit Central African Republic after the country’s announcement of Bitcoin adoption. The group around Sebastién Gouspillou and Nicolas Burtey met with merchants, government officials and representatives of civil society to learn about the plans and progress of the Bitcoin journey.

Central Bankers from 44 countries convened in El Salvador, (definitely not to learn about Bitcoin). Adopting Bitcoin comes back to El Salvador for year two. Bitcoiners head to Central African Republic to learn about their adoption efforts and offer support.